Jambo was our very first ridgeback, and that makes him special.
Since Jambo is around, not a day is the same anymore.
Jambo was a big clown, who was always happy.

Jambo had a lot of hobby’s and the most important thing for him is,
it has to go fast.
Well fast on Jambo’s way, with his big body he is not the fastest at all, but that doesn’t matter for him.
He loves coursing and canicross.

In february 2014 there was a big change for Jambo.
Jambo, was diagnosed with an osteosarcoma in his leg, and the future looked very bad for him.

We were devastated this story happen to us again.
But the doctor’s gave us hope and Jambo some extra time.

In february 2014 Jambo had an operation, where his sick leg was removed.
After a week, Jambo deceided live was also great on 3 legs.
And since then he run around on his 3 legs.

We knew this was just extra time for him.
We knew we had to enjoy every single day with him.
So we did.
That year, we had a great summer!

Unfortunally on March 25th 2015, Jambo’s extra time ended.
It was my deepest wish to have my first ridgeback, there when my first litter was born.
And he did!
On Saturday Marst 21st, 11 wonderfull puppies came into this world.
And the evening before Jambo passed away, he put his big head into the litterbox and say Hello them.

Unfortunnally on wednesday morning, Jambo became sick.
And at the X-ray we saw Jambo’s lungs were full of metastases.

And again we had only 1 more thing we could do.
Saying goodbye to our boy forever.

Jambo, the dog who did not know what an impact on our lives he had.
Having a lot of ridgebacks, becoming a breeder, my company,
everything started, with just that ridgeback puppy, who entered our lives in december 2005. 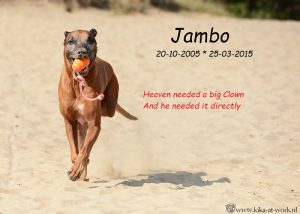